Born in Vienna in 1945 I grew up and attended Elementary school in Styria/Austria.

At eight years of age I moved to Vienna, where my parents operated the oldest Riding School in Austria. My affection to all animals was already present at that time.

I finished Elementary and Public school in a boarding school in Vienna. All my free time I spent in my parents stables. At nine years of age I already owned my own horse 🙂

On 1st of September 1960 I joined the Spanish Riding School as an Eleve. In 1968 I already became “Bereiter” and it was the shortest time ever, that any rider became a “Bereiter”

In 1981 I became “Chief Rider” and achieved this position in the shortest time. 1995 I became the “First Chief Rider” until my retirement from the SRS in 2003.

During my years as Chief Rider I also operated my own dressage stables at Tulbingerkogel in the Vienna Forest, where I trained many riders, who achieved great goals all the way up to the Olympics.

And now ? Every new horse is a new experience ! 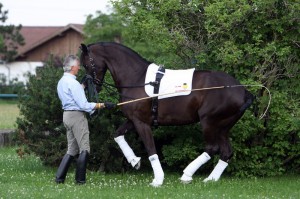